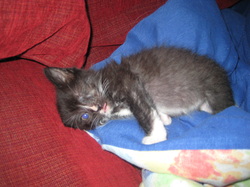 Tuxedo Jack is one of 17 kittens rescued from a hoarding situation.  At that time, he was about two weeks old, and had an incredibly infected eye.  Two days after being rescued, the infected eye ruptured, and he was rushed to the vet to have it removed.  Since he has only had one eye nearly the entire time his eyes have been open, he is remarkably well adapted.  When he and his sister Talon play, nine times out of ten he wins!  Like many bottle-fed babies, he is incredibly loving towards people, and will nuzzle your neck before he falls asleep.  He loves to be part of whatever you're doing, especially if it involves a book!

(He and his sister Talon went home together.  Hooray!) 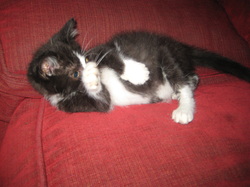 Talon is the only normal one in her family!  Proof that good things come in small packages, she is a feisty affectionate kitten, that loves wrestling with her brother and other fosterlings.  She loves chasing the dog's tail, and then snuggling up to his belly.  (She went home with Tuxedo Jack; together forever!)