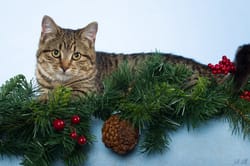 Jupiter is one of twenty one kittens rescued from a single barn!  Rather than growing up feral, (or not growing up at all) Jupiter has joined BCR's crew, and is utterly delighted!  She is a sweet and undemanding kitten, that loves to play.  She will play with toys, with her sister, with the resident dog's tail...she's great at keeping herself occupied!  As soon as you pick her up, her motor switches on, and she'll purr contentedly in your arms.  Is this the sweetheart for you? 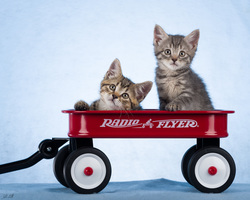 Jupiter and her sister Venus get along quite well!
Roll along, little kittens...