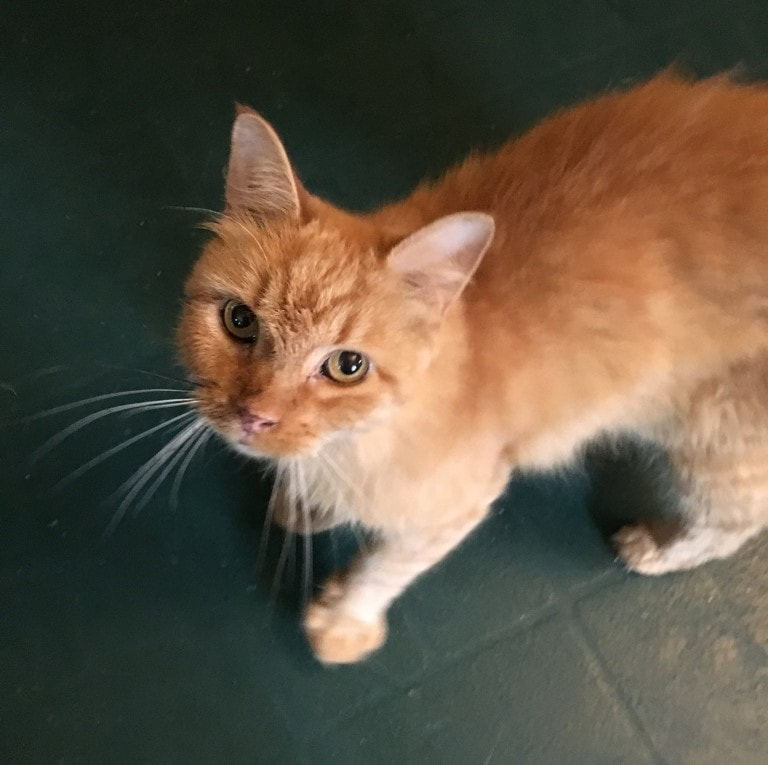 Prepare to be amazed by this benevolent lion!  Aslan was abused and neglected in a trailer park, until an 8 year old girl decided to get him the help he needed.  When he came to BCR's headquarters, he was malnourished, and INFESTED with fleas.  His long and beautiful coat was terribly matted, and his nose was running like a faucet.  He was pretty gross, if we're being honest.
The wonderful folk at No Barks About It gave him a shave and a bath, and he looked like a whole new cat!
While he was in the trailer park, he sustained some head trauma, and that causes him to list to the side.  His right front foot bows a bit when he walks, and he occasionally falls off of what he's jumping on to.  This doesn't affect his ability to eat, use the litter box, or love the stuffing out of his person.  This boy LOVES to cuddle.  He loves to be held and walked around with, snuggle up in your lap, or just quietly sit near you while you do whatever person things you need to do.  He strongly prefers to be in the same room as his person, but he isn't pushy about getting your attention.  He's quite the gentleman.
Aslan gets along splendidly with large breed dogs, and children.  He prefers people over other cats!  He gets along with them just fine, but he's much more interested in what those opposable thumbs can do.
Our vet places his age at somewhere between five and eight years young.
This is a cat who will love you for all of your days.