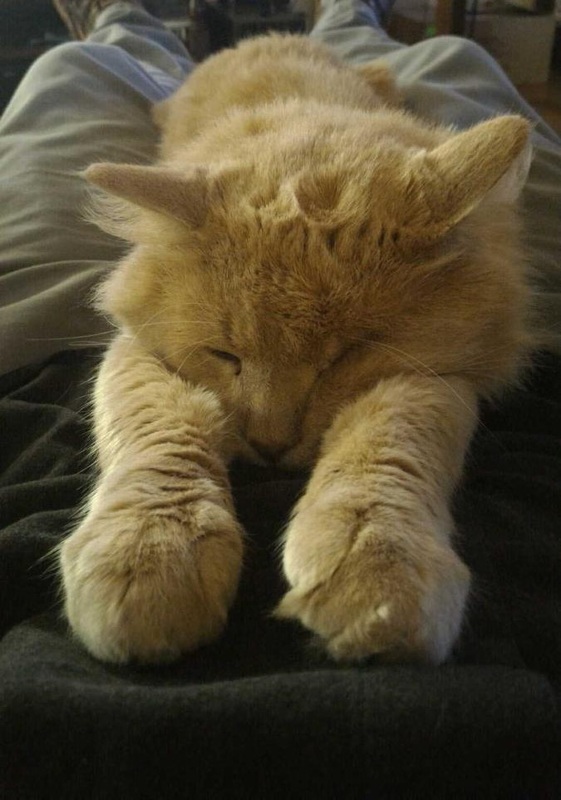 Calvin was one of those "neighborhood" cats.  Everyone knew him, but no one took responsibility for him.  He lived his rakish life, stealing food here, bedding a lady cat there...until one day his outdoor life caught up with him.  His eyelid fused to his cornea, and he no longer has vision in that eye.  There was an infection going on as well.  An animal loving woman in his neighborhood saw his plight, and decided to help.  He was too weak to move around much, so she brought him inside and fed him.  She contacted BCR, to see if we had room.  With a face like that, how could we say no?
Calvin has adjusted beautifully to being an safe and happy indoor cat.  He loves to cuddle with his foster dad, and plays with all sorts of toys while his foster dad is at work.  He gives little love nibbles, but doesn't get out of hand.
At BCR headquarters, when he was recovering from his surgery, Calvin got along perfectly with other cats, and was a bit skittish of the resident dog.  In his foster home, where he is king of everything, dogs are NOT allowed.  Due to his imperfect vision, we think Calvin would do best in  a home where he doesn't have to deal with an exuberant panting beast blindsiding him.
If you are looking for a rakish and cuddly companion, look no further!  Calvin is an amazing guy!